Ashbourne Escape is a lodge built and run by owners Rob and Dawne Topham and is located in the town of Hazyview between the Kruger National Park and the scenic ‘Panorama Route.’ Named after Rob’s grandmother Ashbourne and also after one of the many different homes Rob’s family owned in England, Ashbourne Escape is set high on a hill with views of the Kruger Park and the Sabi River Valley, and catches the cool afternoon breeze and breathtaking sunrises and sunsets.

Rob and Dawne Topham hail from Pietermaritzburg in KwaZulu-Natal where both their families lived from the year 1836. After deciding it was time for a change they relocated to live and work in the cape before moving to Mpumalanga to farm citrus in the Sabi River Valley. Having always had a love affair with the Lowveld, when they decided to downscale from citrus farming, it took just one look at the site to inspire them to build a new home from scratch.

“We wanted to take all that’s good about South African farmhouses, but tweak the design to get rid of passages, poor lighting and lack of bathrooms,” Rob comments.

“I wanted our house to disappear amongst the trees and rocks and definitely didn’t want anything ostentatious,” says Dawne, adding that they were determined to use the land’s natural resources.

While this led to cladding the exterior of the house with rocks found on the farm, it was the couple’s love for thick walls and deep windows that decided the structure. “Besides keeping the place cool in summer and warm in winter, thick walls create a feeling of permanence,” says Rob.

So it was, that armed with a water cart, one Landrover and the assistance of Mandross the local builder and four helpers, the project was eventually finished “18 months and 10 divorces later”!

The result is a home that reflects the couple’s love for the outdoors and their relaxed outlook on life. And given that they decided to build according to the lay of the land instead of levelling the site, they’ve made the most of views that extend as far as the Kruger Park and Drakensberg Escarpment

Our vision was to create a space where people could feel at peace and comfortable and be close to attractions such as; Kruger, Sabi Sands and Panorama Route. We hope that your visit with us is as peaceful as it is comfortable and that you fall in love with our surroundings as much as we have.

We look forward to meeting you and having you with us. 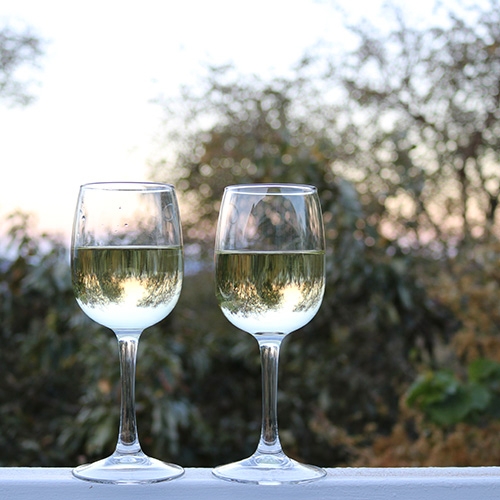 Come prepared for your stay with us in the bush

*We are not a Malaria area, however the Kruger Park is

How to find us here in the bush

Our GPS Co-ordinates are :

From OR Tambo International Airport
(Johannesburg)

Follow the well-marked Ashbourne signs either on the R40 between White River and Hazyview or from Hazyview turn left into the Sabi Road R536 and follow the signs to Ashbourne thereafter.

Don’t be alarmed when you get to the dirt road, just a few kilometers later and you’ll be at Ashbourne where mountains, valleys, sunsets and wine await you.

Follow the well-marked Ashbourne signs either on the R40 between White River and Hazyview or from Hazyview turn left into the Sabi Road R536 and follow the signs to Ashbourne thereafter.

Don’t be alarmed when you get to the dirt road, just a few kilometers later and you’ll be at Ashbourne where mountains, valleys, sunsets and wine await you.

Hear from people who have stayed by us about their experience